Tokyo, Japan, July 31, 2010 Hitachi Metals, Ltd. today announced the development of recycling technology for manufacturing its amorphous metal (Metglas�l ) directly from amorphous cores taken from transformers that have been taken out of service. Hitachi Metals has decided to establish a facility to conduct this operation within its Yasugi Works in Japan.
Ultra-efficient amorphous transformers are garnering attention around the world due to their ability to contribute to energy conservation and help countries curb greenhouse gas emissions. Hitachi Metals will continue in its efforts to develop a recycling framework that will support the further spread of environmentally friendly amorphous transformers.

Amorphous transformers1 are energy-conserving transformers that use amorphous metal in their cores.2 These environmentally friendly transformers can cut power loss – the fixed-rate no-load loss that constantly occurs even when power is not being distributed – by approximately two-thirds compared with conventional transformers manufactured using traditional silicon steel cores. Because of its ultra efficient design used by utilities and industry to both reduce CO2 emissions and save money over the life of the transformer, the use of amorphous transformers has rapidly spread in China, India, the Americas, Japan, Korea and South East Asia, while in Europe field trials are now underway with an eye to near-term adoption.
The typical life span of distribution transformers is 20 to 30 years. After disposal they are often recycled. Many recycling processes for conventional transformer steel are not applicable to amorphous cores because of the boron content in amorphous metal. For this reason, Hitachi Metals has developed a recycling process whereby used cores can be put to the best use possible in the manufacture of amorphous metal ribbon for use in newly constructed transformers.

In the recently developed process, amorphous cores to be recycled are removed from the scrapped transformers at a scrap processing facility. Hitachi Metals will then remove any insulating oil and other impurities that may adhere to the cores. The cores will then be crushed and melted at a recycling plant to be situated within the Yasugi Works in Japan. The plant, with an initial processing capacity of approximately 50 tons per month, is scheduled to go online in 2011.
Furthermore, by 2014, Hitachi Metals plans to have to have two amorphous core recycling plants in operation. One the plant located within the Yasugi Works in Japan and the other operated by Metglas, Inc. in South Carolina, USA. These investments will allow the Company to undertake the large-scale processing of all scrapped transformer cores worldwide.

A transformer is a device that boosts or decreases the voltage of alternating current. Substations employ large transformers, with those utilized for extra-high voltage sometimes reaching 500 tons. Utility poles are equipped with pole-mounted transformers that reduce voltage to 100 or 200 volts for the delivery of electricity to homes, small retail shops and small factories.

2 Core
As a general example, an iron rod is wound with insulated copper wire (conductive wire), and when electric current is applied to the conductive wire, the process of electromagnetic induction magnetizes iron, which then behaves as a magnetic material. If the electric current is stopped the iron loses its magnetic force. In transformers, the core functions as this iron rod. To temporarily use a substance as a magnet is termed magnetization 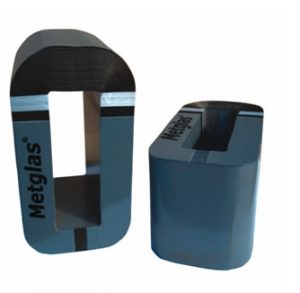 Metglas Commended for Waste Reduction and Recycling in 2020
January 6, 2021

This website uses cookies to improve your experience while you navigate through the website. Out of these cookies, the cookies that are categorized as necessary are stored on your browser as they are essential for the working of basic functionalities of the website. We also use third-party cookies that help us analyze and understand how you use this website. These cookies will be stored in your browser only with your consent. You also have the option to opt-out of these cookies. But opting out of some of these cookies may have an effect on your browsing experience.
Necessary Always Enabled
Necessary cookies are absolutely essential for the website to function properly. This category only includes cookies that ensures basic functionalities and security features of the website. These cookies do not store any personal information.
Non-necessary
Any cookies that may not be particularly necessary for the website to function and is used specifically to collect user personal data via analytics, ads, other embedded contents are termed as non-necessary cookies. It is mandatory to procure user consent prior to running these cookies on your website.
SAVE & ACCEPT